All Euros football chat in here.

Italy looking very impressive. Gutted for Turkey, but they deserved nothing from that that.

Just watching the last leg. Loving the fact Kevin Bridges moved his second vaccination from the morning after the England Scotland game to the day before.

Loving it. Looking forward to some high quality football over the next few weeks and Italy set the tone tonight.

It’s a big deal after 23 years

I can’t wait. Just a shame Ireland never made the cut. A full house would have been epic.

They were very good. A dark horse for sure. Still laughing at the little ball carrying car 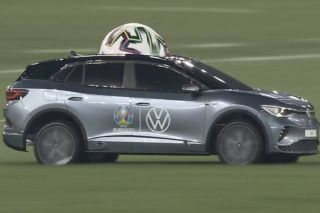 That was totally random wasn’t it? Are they having it in every match?

Thought Italy swamped Turkey completely in the opening match. Although at one point I thought the Turks might have a game plan that worked and get a smash and grab. Never happened and they got punished for opening up.

Also think England’s lack of a proper centre-back partnership will cost them.

France should be winning it, ridiculous squad, better than the World Cup squad of 2018.

I reckon the semis will end up as Italy v France and Portugal v Netherlands.

Most likely final being France v Portugal as you say.

And the winner? Should be France on paper but…I’ll go Portugal to retain the title.

Biggest flop: this is nailed on as England, I hate to say. Will likely limp to the Quarter Finals playing turgid football before being hammered by a team with more invention. I’d love it if I was proved wrong!

That was truly terrifying.

Horrendous. They really should have stopped filming much earlier. Heartbreaking

Delighted to see the news coming through from UEFA that he’s being stabilised in hospital and is alive. I feared the worst. Watching with my 11 year old son and both of us in shock. Truly awful pictures and bbc should have cut the feed earlier I think.

Yeah so happy he’s now awake. One of the worst things I’ve seen watching football. They should have cut the film as soon as it was obvious how serious it was.

I think Denmark just made millions of new supporters for the way their team reacted through all that, especially their captain.