What Kind of Headphones Do You Use for DJing?

Hey all, figure I’d talk about this here as most of us seem to get to play some music to proper dance floors once in a while.

I’ve been using AIAIAI TMA-2’s ever since they first came out with the modular model and I quite like them but a few years into ownership and the PU leather earpads and cables began showing their weakenesses. I just bought new earpads and a new cable, quite expensive, and even that won’t fix all the worrying bits because the headband cables have begun fraying too, and I’m not crazy about replacing a whole headband because of that (in fairness, mine hasn’t snapped like the old ones did).

I like the headphones’ sound for DJing, I realize all these things have a shelf life, I just wonder if it’ll be worth it to keep “fixing” them, or if I’m better off just getting something new at some point. Probably not, but who knows, maybe there’s something better out there. Sadly I just cannot like the sound of HD-25’s. they are really not my favorites.

Anyway, who’s using what, how often do you fix/get new ones, and what’s available out there these days? Just curious…

Sennheiser hd280 just because they are relatively cheap and the isolation is very good so you can mix in the headphones when the monitors are too far away or non existent. I’ve never seen anyone else use them at a gig though.

Alternating between Sennheiser HD25 and Phonon SMB02 (really recommend this one)

Same as you, the TMA-2’s. I picked them up dirt cheap on a European site a few years ago and have had no complaints. I rarely play out these days so I’m expecting them to outlive me.

At some point I’ll have enough parts to have a new one, and a busted one.

Ideally I wasn’t expecting things like the rubber coating on the cables to go bad like they did. I saw they released a wound version for some label, wish they had kept those in stock as they will probably last longer.

I like these too. Even better with the Beyer velour pads (not designed for the Sony but fit perfectly) 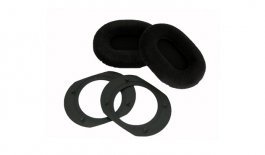 My earpads went first from sweat and all that - understandable. The cable began fraying from transport I think, that was a little more unexpected, but probably had it coming too. The headband cable coil thing fraying was just bad quality materials IMO.

not bad as they are closed-back, but i wouldn’t say that popping them on both ears shuts out ALL the club noise.

in fact - i kind of don’t want mine to, i keep the cans only playing the cue record and one ear’s for that, the other ear’s for the monitors. and i appreciate a little hearing a bit of the monitors through the cue ear too, scrunching it against my shoulder for that true dj scoliosis effect.

I second the hd280s, last period I was djing regularly these were my go to, loved they way they folded for transport, great sound quality and nice price.

I used the HD280’s for messing about in my ‘studio’ rather than DJing as they are very flat, imho. I say used, as the end of the jack snapped off in my laptop after about 7 months.

Decent value for money though

Just always used HD25s. I tend to find something I like and stick with it.

Bad news about the short life, hopefully the guarantee covered it! I gave mine a good hammering for a few years before they gave up the ghost. The flat sound was part of the attraction for me, I’m not a big fan of sound colouring from headphones or speakers.