Shout to @J_C for this but Bruce has put up a you and famous people thread but what about all the small interactions. Small Claims Court wholesale nicked off Radio 6.

Mine… Geoff Capes (weightlifter for non-UK people or anyone under 35) signed my Kit Kat wrapper at the Orpington fete. Oh and I made a cup of tea for John Lydon.

I have a photo somewhere with The Fonz

I once met old school comedian and real narky bastard in real life Bernie Winters with his dog Schnorbitz.

He opened a refitted shop I worked in on Saturdays. Asked him for his autograph, to which he mumbled ‘Fuxxake’ and then despite me telling him three times, spelled my name wrong.

Pam Ayres and The Honey Monster on the same day in Tesco’s Andover circa 1980.

I sat next to Carl Cox on my last flight to Ibiza. I could just hear the music he was preparing for his set at Usiwushiwishiwoo and it was horrific.

Chris Tarrant made me cry as a kid when he was trying to be nice by explaining why I was too small to be on Tiswas. I had to watch from the sidelines whilst my older siblings enjoyed the chaos.

Here’s me with Blovid Johnson at Glastonbury in 2003 I think. No fucking idea what he was doing there, he was inexplicably with Billy Bragg. I was off my tits and I have to say, so was Blovid by the way he was talking 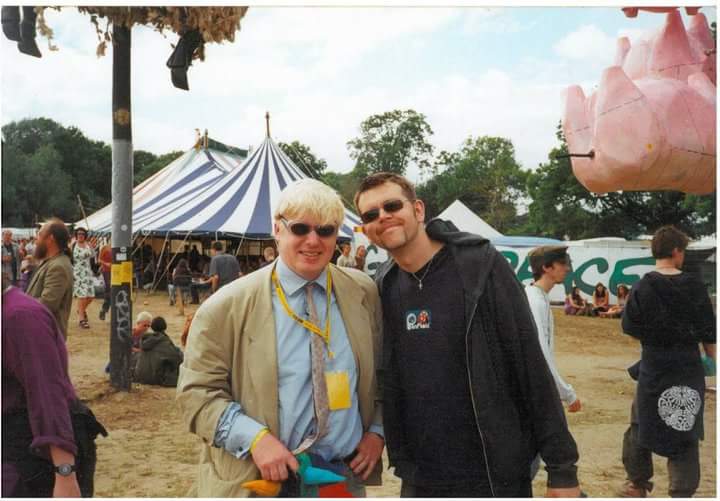 You were in strangling distance.

To be fair he always sounds off his head.

A friend and I met Chuck D when we were about 18. Chuck signed my mates “It Takes A Nation of Millions” LP but got our names mixed up and signed it to me instead of my friend.

Around the same time (pre smoking ban) I shared a dodgy soap bar joint with Madlib on an Aberdeen dancefloor during a Gilles P set.

Got stabbed in the eye by Chaka Khan’s fro comb in Flip, Long Acre as she was absentmindedly teasing her locks around '84. Should have made a small claim in retrospect.

To be fair he should have his head removed on the block.

Is he wearing swimming goggles here?

came to visit our swimming club when I was 12 and I had a quick chat with him.

Shared a cab with Alex James from Blur around late 90’s from Covent Garden to some club my mate’s brother was taking us to (it was shit) and Alex James was a bellend. Kept asking us if we had any gear which we did but told him we didn’t.

A not overly famous I admit Judy Cheeks picked me out of everyone at Renaissance to sing to me during her P.A. I felt slightly uncomfortable to say the least.

I sat next to Paul McCartney on the train home once.

Oh man New York is good for these-

My friends and I were at Fulton Mall in downtown brooklyn and we were very excited to spot Melle Mel. We followed him for a block at which point he told us he would kill us if we didn’t stop staring at him.

I opened a beer for Debby Harry at a party.

Spike Lee filmed a commercial on my neighbors stoop and wouldn’t talk to anyone and hid behind a giant bodyguard.

I rode the elevator up in to the old Sony tower at 550 Madison Avenue with Bob Dylan who then got asked for ID by the security desk and was absolutely incredulous.

Bijoux Phillips walked up to me and called me a “slut” in a restaurant in soho (I have never met her before).

Fiona Apple angrily accosted me in Washington Square Park and told me I was a terrible person for “never talking to her again.” we don’t know each other (she seemed pretty crazed).

Many more and I’m excluding work related ones because that seems unprofessional.