Memories of the Chill Out Room?

Any memories of those long lost chill out rooms (or more contemporary spaces obviously) where you might escape the dancefloor for a while? Where were they, what was the soundtrack? (I’m guessing this thread could feature Mixmaster Morris quite heavily, and quite right too.) Would their return be a good thing?

pretty sure the first proper chill out room I experienced was at the Shamen Synergy tour and, yes, Mixmaster Morris was playing! all I can really remember is the nice lights and appalling sound bleed from the main room.

Found a flyer from that tour for the Town & Country, I’d forgotten about the ‘Psychoactive Foodbar’ loads of gurana products no doubt

5-6 months ago I met Mixmaster Morris in Camberwell Morrisons. I took his photo, I share if I can find it.

Saw them at the rocket. That was the first night where us bunch of indie kids heard music mixed where you couldn’t tell where one record finished and the next one started. Absolutely life changing for me

Yep, that’s Morris’s manor, he’s a national treasure. Should be a blue plaque on his house

Not normally a fan of more squat-y affairs, but Telepathic Fish’s ambient ‘parties’ at the Cool Tan Centre in Brixton, often with Morris there, were nice ways to spend a Sunday afternoon.

I read a bit about those sessions in David Toops ‘Ocean of Sound’ book, what were your recollections?

Oscillate, at Bonds, Moseley Dance Centre and the Que Club in Birmingham mid 90s. The whole club was the chill out room, I’m still trying to get back there, the older I get the more I realise how much the experiences I had at these parties influenced me, and yes Morris did feature. Here’s a really good RBMA article about it.

I’d love to do something similar now but with a wider ambient musical focus.

Lots of Camberwell squatters and a smattering of more clubby kids coming down. A cooperative/ communal feel with homemade food and such like. Mixtapes on sale too. Random sofas scattered about the place. Def quite an electronica-y take on ambient. Do recall Aphex Twin DJ’d there as well - possibly Coldcut too. Really can’t remember how long it lasted for.

Sterns in Worthing had a proper chill out room. First one I experienced. I’ve got zero recollection of anything that was played in it. Hazy teenage days, to say the least.

That sounds amazing, never heard of it before. The article’s a great read

When the ambient scene emerged in the early 1990s, I was somewhat ambivalent about the notion of whole clubs dedicated to low tempo electron...

I remember seeing the Tonka crew play in the second room at Sterns, certainly a respite from the hardcore scenes down in the main room!

I was booked to play a long set in a chillout tent at an outdoor event in 1992. The headliner in the main and massive circus marquee was Grooverider and the rest of the DJs were all local Sydney spinners. The chillout tent was unique in that the production team had created an indoor rockery garden with real palm trees - it looked amazing. I wasn’t due on till 3am, so around 12.30am I dumped a strong white one, thinking that by the time I was stepping up to the decks, I’d be feeling groovy. Just as I’d necked the pill, the promoter came up to me and said “the 1am DJ hasn’t showed up - you’re on!”.

Now, when I say that this pill came on strong and very suddenly, I’m not kidding. I made my way up to the decks and pulled out my first record. I was having those big whooshing breaths and my eyes started shaking in their sockets like a coin in a tumble dryer. I can still recall my shaking hand attempting to marry the stylus tip with the intro groove on the 12" which oddly I can still recall was One Dove’s “Fallen” the Nancy & Lee Mix.

By this time it was obvious to all and sundry spreadeagled around the grass before me that I was residing on planet fucked and I could feel eyes on me, waiting with amusement and horror at which direction this may go. I forgot to mention that it was pretty dark in this tent - the team had taken “ambient lighting” to it’s extreme but they had kindly provided the DJs with a torch to navigate their crate of records and to see the decks etc.

Mixing was proving to be like carrying custard with a tennis racquet, so I opted for some shonky blends and fades. I was still coming up in a big way and the adrenaline of the public performance only coursed the chemicals through me at a rapidly increased rate. I felt a wave of nausea pass over me and everything went wobbly. I felt myself looming forward over the decks as my legs weakened and bowed. Luckily for me, there was a pole to grab onto to maintain both my balance and my dignity.

But it wasn’t a pole.

It was the torch placed on it’s base with the light turned on.

As I made a desperate grab for what was not a metal support, but the far less solid brace of a beam of light, my momentum carried me forward and I had no choice but to put my hands out to stop my fall. the resulting BA-BOOM and needle skate across the record made sure that all eyes were definitely now on me. In one of the greatest scenes of dug addled empathy that you’d only find circa 1992, the horizontal crowd did not clap or laugh or make things worse. Instead a guy stepped forward with a home made bong packed with some fine herbage and we all stopped while I took a big toke, steadied myself and gained enough composure to put another record on. That record was The Orb’s “Adventures Beyond The Ultraworld”.

I then proceeded to take myself and lay down with the punters for the rest of my set, standing up only in time to flip each of the double LP’s 4 sides. We all enjoyed it in it’s entirety.

Later on a real trainspotter type guy I vaguely knew thought he’d come up to me and critique my set, telling me it wasn’t “progressive” enough. I just laughed in his face and told him to fuck off. 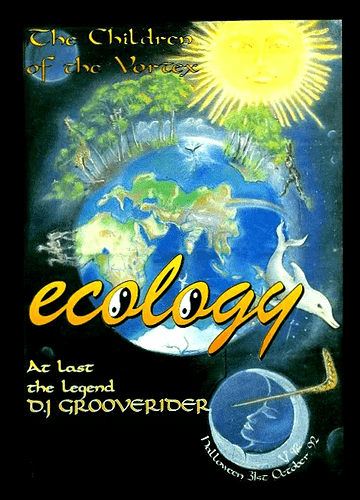 Must be a Mixmaster Morris synergy in the air. Saw him the other day talking to friends round the back of the National Theatre, South Bank. Always wondered if a festival was really a festival unless I saw him wandering around in his Silver Jacket.

And on the Chill Out Room/Club thing. I use to go to a Sunday afternoon session at Heaven which was massively ambient, beds on the floor and talks in a room upstairs. Can’t find any mention of it online and don’t think I ever knew it’s name.

Amazing story, I wonder if we’re getting to the heart of the Chill Out room concept? Was it all about a safe space for the chemical casualties ?? That flyer is a wonderful thing

Love this version of ‘Where’s Wally’ - MMM sightings in the wild!

The Sunday session at Heaven is intriguing, I’m guessing Morris had a hand in that too…

Always liked the chill out spot at the 1990/91 Joy events in Leeds at the old Polytechnic. I think the DJ was Simon Mu. In fact anywhere with a “back room” or chill out room was usually where I’d plot up from about 1991 onwards. The small chill out rooms at Back to Basics at the Music Factory and the Pleasure Rooms were good. The Crow’s Nest at Paradise Factory etc.

Ultimate chill out room was upstairs at the PSV club in Hulme where they played dub reggae all night and dubious looking characters would be passing around the crack pipe. Definitely not very balearic.