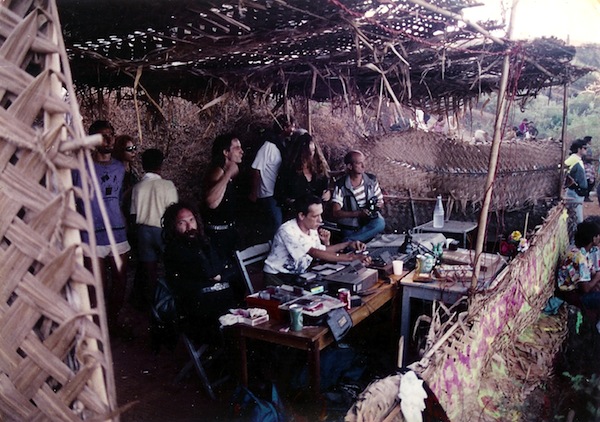 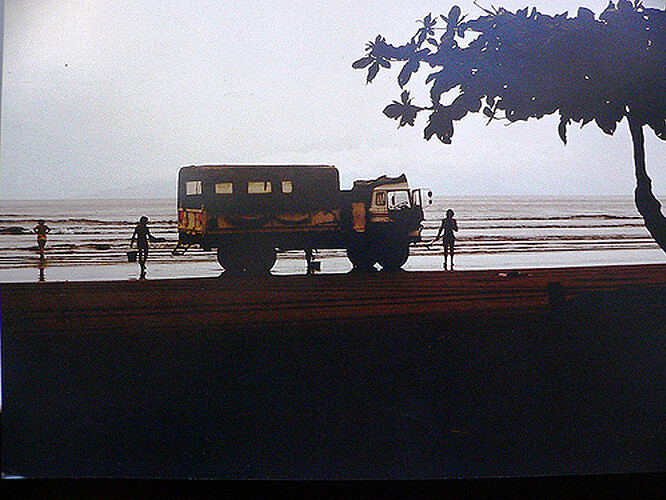 Unveiling the Secret - The Roots of Trance - Bleep43 -

Unveiling The Secret - The Roots of Trance by Dave Mothersole So there we were, three fre...

It’s brilliant. And has this video in it which has DJ Laurent djing in it… 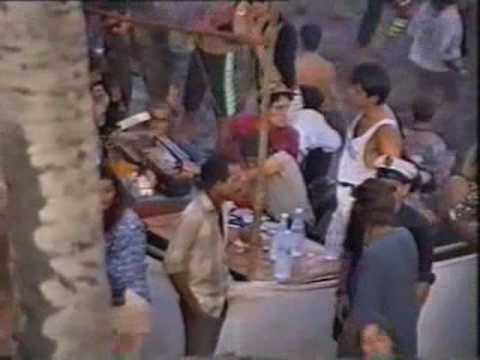 Did anyone visit back then?

That first track on Dave’s mix is absolutely superb, long time favourite mix since DJH days, sadly by the time I got to Goa in 91 it was already heading towards 140bpm etc, must admit I was a massive fan of the EyeQ sound though.
Best bit was being able to ride the motorcycle down the beaches from Arambol to Calangute, amazing times.

Edit: love those videos @Apiento wish I’d made it there in 89

Edit 2: wish I’d been there in 87 when they played Zoolookology, that album and Yello’s New Mix in one go double LP, probably my most played albums in the late 80s

I was over there in '94 and people were saying then that ‘Goa was over, it’s full of tourists’ but it really wasn’t. I don’t remember there being any bars…you had to go down to a beach shack or into a hotel for a drink. There certainly weren’t any clubs at all.

I thought it was brilliant and mad and as Dave alluded to in that piece, it was like being teleported into another world…from a freezing cold London in January to a crazy, hot, exotic, insane other world.

Colourful characters from every corner of the globe; people of all ages and everyone so friendly, not least the Goan people! If they saw you walking they would offer a backie on their scooters and then invite you to their home for tea and to meet the family! Mad…

And while I say there were no clubs, you did of course have the outdoor parties such as the ones in the videos. LSD being the drug of choice…perfect for that environment; dancing underneath palm trees with a sky full of stars and the moon so big you felt like you could almost reach out and touch it. I know that might sound like hippy trippy nonsense but it was amazing man

Music wise, the bpm was a bit nippy and it was heading into that psy-trance thing (Oaky & Rampling got into it in quite a big way didn’t they?)…but over there it seemed to make sense. Even ended up producing a couple of Goa things myself on my return to blighty!

I got into the goa thing via rich UK hippies in 1990-93.
Very occasionally brilliant tunes. KoxBox for instance.
But on the whole:
The best soundsystems
The best locations
The best dr*gs
But relentless mono-maniacal music.

So - very frustrating on the whole and I would have been better off at Sabresonic with the proles.

Thanks for sharing this.

I have definitely read this before. Possibly on DJH. Really interesting.

Great article - thanks for posting. Kind of always wish I’d went as loved some of the stuff Oakenfold played mid nineties which is probably the lite version of the sound

Yes there was a thread by Dave on DJH

I agree totally with your ‘brilliant and mad’, and being ‘teleported into another world’ in the depths of the British winter. Like Dave wrote, it was such an eye opener compared to Ibiza or the clubs back home, I hadn’t experienced anything like it before. Me and my then girlfriend got the bus to Hampi the second time we went, that was hands down the craziest experience of my life.

I first went to India in 1992 and spent a couple of months in Goa. India was a pretty wild trip for an 18 year old lad from a village in England.
Of course I met people who had been in Goa from the late 80s onwards and told me it had changed etc etc but it was still pretty crazy in 92.

At that time you had to book a slot to make a phone call home so it really felt like another world. I wrote actual letters home to my raving mates regaling them of the lunacy of India.

More than any big parties, for us Goa was just one big good time: so cheap to live, amazing scenery and weather, rented an Enfield Bullet bike and tore around to incredible deserted beaches and little shacks and generally just hung out having the time of your life.

Heavy trance vibes compared to the US house music that was my sound at the time. The chillum ritual was everything and for anyone who’s ever really properly smoked charas with an India head then you’ll know the vibe. Boom Shankar! Lots of high quality acid around too. Dudes with big bags of Dexies like sweets. And the stuff you could buy over the counter in the pharmacy…as I said, a pretty wild time all round.

Bizarrely the one tune that sticks in my head as a kind of end of nighter was Bob Geldof/The Great Song Of Indifference. It ends in a kind of mad fiddle hoe down. Maybe that was just a thing for a particular crowd?

Lots of London kids there, already burned out from 4 years since ‘88 but the main thing was just the crowd of total nutters from around the world who kind of washed up in India. Travelling at that time still had the final remnants of The Serpent era / Hippy Trail about it and there were a fair few you came across who were definitely on the run from somewhere!

And the India scene wasn’t just Goa. You could go South to Kerala or across to Hampi or up North to Rajasthan and beyond to places in Himachal like Parvati Valley, Manali, Pulga where the charas came from and it was the same travelling crew and crazy vibe. I went back to India and Nepal again in 1996 for a few months and it had already changed a lot then. Last visited in 2005 and globalisation/ gentrification/ technology had created radical change.

Goa was very different! Unrecognisable really (mind you, so was I. We stayed in a 5* hotel near where I’d lived in a shack in 92!).

I’d love to go back again, take the kids etc. India doesn’t leave you once it’s in your blood. Really good times. Great to be reminded of them on this thread and see the videos.

Absolutely the best time of my life. I think my round the world plane ticket cost something stupid like £400 at the time. If you spent £50 a week in India then you were living like a king. We went on to Thailand afterwards, sat on an island for a few weeks. Back via Sydney and LA when they were in the throes of their own rave scenes. Life changing trip all round. I miss those care free days!

Some great stories. I went to India with my hippy parents and spent most of it in Himachal Pradesh, when we were there in such a remote place the only food that was provided to us was the food that was giving us all the shits. It did not kill me but I am not sure if it made me stronger either ! There is no place like India, it’s tough and there are few places in the modern world where we can be calm away from what we think of society in our own Western loop. It’s still one of the last places where contemplation and revelation can happen. People arrive there shipwrecked and it’s what you make of the wreck when mooching around I always think.

I guess in India the best thing is feeling like a fish out of water but in Nepal due to the amount of travellers it is a lot easier to get about and gentler in it’s atmosphere. I bumped into some really crazy people in both countries, I agree as there are a lot of people on the run from whatever in their own lives who just do not want to be found. It makes an interesting dinner table story over some dahl for sure. 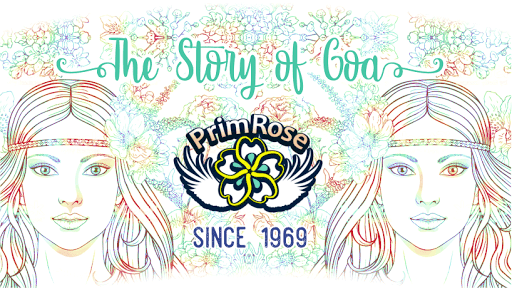 Fab post @elzorro it really was heaven wasn’t it.

Last time I went to India was 2000, Kerala, after Goa it was initially a bit of a head fuck but after we’d done the backwaters and the hills we ended up in a small hotel in Kochin old town, they upgraded us to a suite, absolutely gorgeous for next to nothing, then finished off with a week in Varkala, a large traveler/hippie contingent, I imagine was akin to the earlier days in Goa. Even then you could still live like a king on next to nothing, me and the missus financed the trip with student loans. No ones mentioned the food yet, absolutely amazing. Best times indeed.

While we’re on the subject, I’ve got a couple of early bird tickets for the LHM thing in Goa next year…hoping things will be back to some sort of ‘normality’ by then!

Rampling got into it in quite a big way didn’t they?

Yes, got dragged along to Return to the Source once,

was fun, that Oakey essential mix was pretty popular at the time… we did the Thailand thing for 10 years or so from '87 was mad as well, prefer the food too.

Main memory of Thai ‘food’ from 92 was ordering a magic mushroom omelette from our little local beach shack on Koh Samui. The guy jumped on his scooter, came back 5 mins later riding one handed with a plate in his other hand with the omelette on it. Basically 4 giant, whole mushrooms and a bit of runny egg. He’d got his mum to make it! That turned out to be a pretty funny afternoon…