Anyone on this forum still trade dubs of tapes? Not really interested in digital files but I’ve got thousands of mixes ranging from Kool DJ Red Alert to full nights at Shelter and I’m always looking for people who are down to send a dub for a dub

I’d be interested in all of those ! Have you got a list of what you got? Are you looking for anything in paticular?

If a couple more people reply I’m going to take the time to compile a big list (something I should do anyway while stuck in my house). The shortest answer is “stuff I don’t have”-

Don’t suppose you have ‘Daft Punk Live at the Red Box Dublin 1997’? Long shot I know but it’s pretty much the holy grail (and there’s plenty of Chicago house on it!)

I think I have it as a file not as a tape. If I find the drive that it’s on (I’m a bit of a hoarder) I will figure out how to send/post it.

Not to start shit but I will say that I DO have a lot of Sneak tapes that blow any Daft Punk set I’ve ever heard out of the proverbial water.

Jesus mate - if you did have it, I’ll trade you a kidney!

Can’t argue with Sneak in his prime for sure.

Are you a Ken Collier fan?

Yeah Ken Collier all day. That’s the epitome of the good shit.

Here’s my current “needs to be digitized” pile. The pandemic has been good for acquisition and bad for digitizing (what with all the remote fucking school I must supervise

Posting this not to flam at all but rather because I think there’s a lot of deep people lurking here and it would be great to get some real dub trades going. 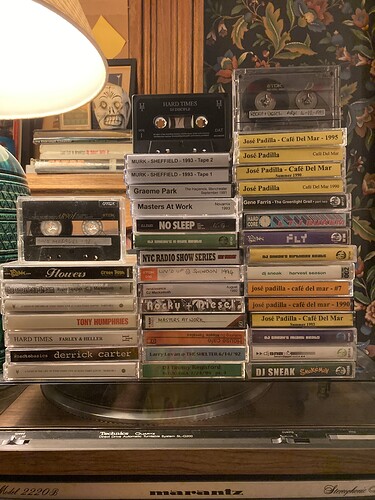 I want Sneak and Jose Padilla!

replying to follow this thread. not in possession of any highly sought after stuff but love good mixes on tape (and increasingly CDs, just bought a CD player for 1st time in decades) and always looking for more. esp love to make & trade mixes w/ friends

Does anyone remember the tapes they used to sell on Camden Market in the late 80s? You’d get C90s (unmixed) of dance records. There were various compliations, all unmixed, sorted by genre (techno, new beat, deep house etc) and then some that just had “rave” hits (KLF, Frankie Knuckles, Izit). They were quite a big deal at the time and used to get swapped a lot. But I’ve never seen any reference to them online.

Yes they were great. I have a very early Billy nasty one somewhere before he went full nosebleed. Progressive House stuff mainly as I recall.

An old acquaintance Mark used to have a flat above the Record and Tape Exchange on Camden High Street. We’d all pile back there after parties and help ourselves to mix tapes his mate used to stash there. There was one in 1990 we absolutely rinsed called Must be the Music. Years later I commented on one of the tracks on that mix on YouTube and told the story about this bloke that used to sell these mixtapes on Camden Market. A girl replied and said that was her boyfriend, he mixed a fair few of them himself. Still got the cover somewhere, cassette is long gone sadly…

Got a few I recorded in 87 and 88 plus more mixes but nothing in good enough nick to swap. Mixtapes gotta place just like vinyl does though

Picked up a C90 of someone juggling 2 copies of several volumes of Ultimate Breaks & Beats in Camden around '86. Green had dawn cover, not sure there was a name to it.

where did you buy these tapes from?
so lush

Every possible place. Weirdo British tape traders. Weirdo American eBay sellers. The Japanese are always good for the goods. No bargains in Japan tho. Ever.

Do you have any tapes of Matt Dike, co-producer of ‘Paul’s Boutique’ & owner of Delicious Vinyl.
Apparently he was a shit hot DJ back in the 80s, more LA than NY tho although he was a New Yorker, would love to hear a tape of his.

do you have any links for these weirdo spots? or ebay ids?
sorry to ask…i find searching for tapes really difficult for some reason, which is shit because mixtape is the thing i love the most lol

The one dude who I think has them is not willing to even acknowledge that he has them let alone share them.