Whats the best thing you've ever seen in the studio?

Mine was watching my mate loop a beat on an Akai sampler in the early 90s then arrange it on an Atari ST. Blew my tiny mind…

Very similar, actually. I used to work in a south coast record shop in 1990 and rented a room from the boss too. There was a studio set up in the lounge (for making hardcore) and I was shown how to use the Akai sampler and given a floppy disc and told to start experimenting. We talked about releasing a US House styled 12 but it never happened. I was ripping loops and beats from Strictly and Nervous records.

And more recently, VCV Rack has blown my mind and kept me sane for the past year.

Ah man. I went for the real life version and now have a bit of modular. For those not aware VCV Rack is an online version of modular synthesis where you can plug and play with loads of modules. It’s pretty fun. https://vcvrack.com/

I’m jonesing so bad for a hardware rack but could never afford it. 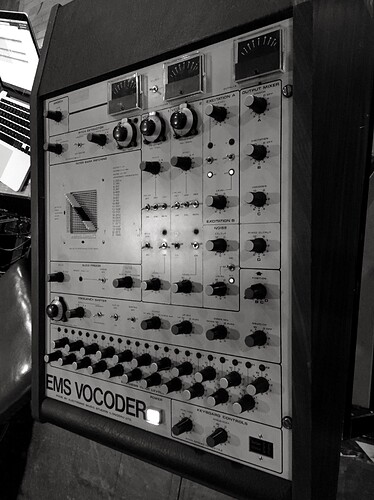 Ricky Romain. He is one of the supreme UK sitar masters, and my jaw was permanently on the floor in Jon Tye’s studio, whilst (together with Jon) we recorded an album together in late summer of 2020. He’s 70 years old and shreds like a MF - his chops are off the chart and he is the most sophisticated, rhythmic and lyrical player I have ever encountered. Breathtaking.

*also, special mention to Jon’s Mutron Bi-Phase. Creamy, churning, analogue, stereo imaging; unlike any other modulator I have ever heard.

A huge, classic Neve console, slightly raised from its usual height with small wooden blocks under the feet… so Bryan Ferry could get his knees under it

I’ve fallen down the eurocrack rabbit hole too, now at 420hp yikes