Despite not having a proper gig for over a year, I’ve spent the best part of my time during the pandemic listening to new music, ripping records and just overall grabbing more and more music to play out once it’s a possibility to do so again. The issue, however, is that I now have way too much new music, all of which is “untested” on the floor, and most of it is digital. I’m already going anxious about going a little nuts picking songs the next time I play out, as I’ve been unable to develop my set over the past few months due to this stupid pandemic.

The question is, how do you (or just plain do you?) organize your folders/playlists on Rekordbox?

Do you do it by moods? BPM range? Date added? Play count? Pre-prepared sets? Not at all? I’ve definitely let my list get out of hand and now I have no idea how to separate everything in a way that will let me access what I want when I need it.

Back in the days I used to play basically 100% on vinyl, the way my sets evolved had mainly to do with adding 5 or 6 new records to the record box a month, so the sets developed organically out of a few “anchor” tracks, a few new tracks, and a few wildcards. That’s my favorite because you get reeeeally intimate with your collection over time. After a while, if things get boring, just do some digging at home to remember what you own and put it in the bag.

With digital it’s so much worse. When I have everything with me, it’s a lot harder IMO, as the sheer choice makes my head spin. It’s better when I had steady gigs, because I could remember more or less a good group of tracks, but now over a year later it’s all a toss up and I’m anxious about going back to gigging with a lot of great new tracks and not doing them justice because of my ADDish tendencies.

Maybe I should record more sets during the downtime, that might help some. But I am really curious how/if you guys deal with this.

Thanks (if you made it this far!)

I try to never take the same records as the last few gigs, except for maybe 2 or 3. I tend to favour newer purchases as it keeps it more interesting for me.

I have however dug out lots of old stuff that hasn’t had a play out for quite a while and it’s all stacked up, too much to really all get a play in a set. I just really have my stuff organised by genre in the shelfs, and by genre in my box, and select by whatever feels right. Probably not the best way to do it but I have always done it that way and I like the organic expressive way it turns out in a set.

I think it’s interesting to think of digital organisation in a slightly different way than physical organisation. I really liked Avalon Emmerson’s approach that she laid out in her Art of DJing as she basically utilises the technology of Rekordbox to max potential. Basically, if you’re just dropping stuff into folders you’re not doing it right. For some this is overkill but I think working with digital allows you to interact with your music in different ways and this means my sets when I play from CDJ’s are often quite different to when I play with vinyl. I kind of like this though because it keeps things interesting for me and makes the process slightly different between the two. 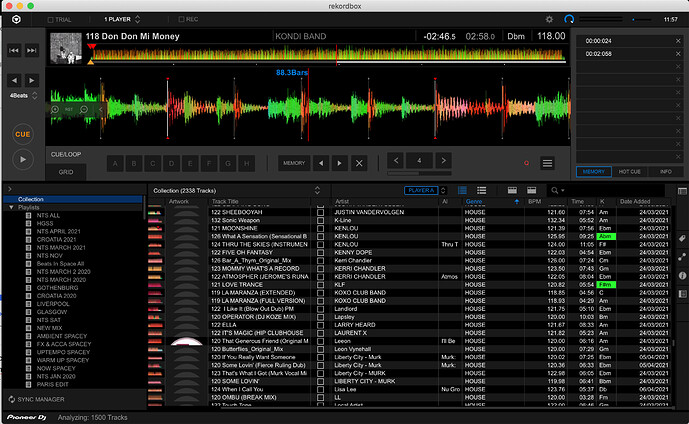 I just spent about a month sorting out all my wavs and getting them in one folder. Now all ordered and with bpms, genres and cue points. Feels good and now I am going to buy more and add them in. I love rekordbox for sorting the digi stuff. It’s so good but fuck that was a long process.

Just for balance. I don’t play out, just for my own entertainment really. My personal approach is several thousand records in three rooms and a couple of cupboards.
Semi organized by genre, label, artist sometimes. Mostly erratic and disorganized but i somehow know where most of it is. Sometimes.

What interests me most is on the left side, the playlists. Looks like you have both genre/mood playlists, and set playlists. I was heading in that direction, too…

Thanks for reminding me of that video, I need to see it again. I agree that in an optimum setting, the approach is different enough to be interesting - that’s where I’m trying to get. Right now it feels like I arrive at gigs with a virtual disorganised record shelf, which is daunting - even with the CDJ sort function and search.

Personally I think that playlists should be viewed as virtual crates. If you’ve got more than 40-50 tunes in a playlist you might as well just be searching your collection. I’ve got a ton of playlists in my Rekordbox on various themes.
Some of the best ones are where I’ve surfed the Collection with it sorted on BPM range or Key and picked out tunes that work and chucked them in a new playlist. It’s the digital version of pulling records from your shelves and sticking them in a pile.

Agree that having access to too many tunes (digitally) is a massive headache if you are playing out. You also lose grip on quality if you’ve got 10,000 tunes at your fingertips.

Mostly playlists for rekordbox for me… past events playlist and incoming folders of new stuff unsorted, also genre/mood. Been digging into the my tags, (explained in Avalon Emerson video) I think they could be most helpful and just adding them as I go along. The filtering of my tags on the the CDJ’s is pretty rad once you have some tags in there.

I don’t seem to get very good sound quality when recording my records - always sound like too much bass. I have M44-7 pickups - maybe they are the issue as they are quite heavy on the bottom end. How do you record your records to your computer? Seems like it’d be easier just to start again digital as digital files are so cheap they are practically being given away. If you need 30 tunes for a gig, might as well spend £30 rather than spend hours if not days recording 30 records to your computer.

When I did play records out I also just swapped out about 10 records for each gig, unless it was for a completely different vibe, in which case I’d have to empty the whole bag and start again. If you have a new record that you love it makes sense to play it more than once, so those new records would stay for a few gigs and get swapped out gradually.

Yeah. It’s all pretty organised so it seems to work making a playlist for each party. Also gives you that feeling of digging through your records and getting excited about the music.

Agree with the ‘reduced selection’ themes. It also definitely helps to have a focal point or ‘event’ in mind, whether it’s a monthly mix / radio show, actual gig u lucky bastard, themed mixtape for friends & neighbors or something else. This helps contextualize your selection, moods, and narrative arc. Pack your virtual / real crates accordingly.

For radio mixes I will usually start with 40-50 tracks then mess around and they get eventually whittled down to 25-30?

for dj sets I used to bring as many digi tracks as I would normally bring records. I used to bring waaay to many and I now avoid the absurdity of choice. Trust your selection, If you don’t back yourself who will?

I record straight from my A&H Xone 42 soundcard into Audacity. It has decent enough preamps. To my ears the rips sound the same as listening to them through my hifi speakers. I make sure to record around -3db, if I need more volume I’ll turn the gain up on the software post recording. It’s almost never the case. My carts are silver pro ortofon concordes, also nothing special, and I do very very very little post processing. I just can’t be bothered to edit every single track on ableton after ripping, although I definitely admire those who do. Ripping for me is just a way to get the track to digital, usually done the night before or thereabouts.

I agree very much with your last sentence. The issue is lack of practice in the actual club environment does make me doubt myself. That’s the issue with recording sets at home - it can be good for testing out selections, but on the other hand the absence of a dancing crowd might make you worse at selecting stuff that works for that specific environment.

Literally just got Rekordbox with DVS so I can play vinyl and digital, strictly for home though. My two cents re digital is less is more - waaay too easy to have thousands of files to wade through - reckon I’m gonna try to maintain a main folder that has no more than 150 tunes in it - about the size of a couple of average record bags. Can then switch records in and out from wider set of tunes.

I’m curious about rekorbox with DVS myself, what mixer are you using? I have an A&H, would probably need to get a soundcard to use DVS…

Got the Pioneer DJM250 MK2 because I wanted DVS and a new mixer that also let me play normal vinyl. It comes with Rekordbox and Rekordbox DVS licenses thrown in, and though it’s the baby of their mixer family, I’ve always fancied a Pioneer. I’m amazed at how good it sounds on all the same kit versus my old Numark N4. I’ve actually literally just finished getting it all set up

Edit: No soundcard required either - all in mixer. Works great on the reconditioned i5/256gSSD/8g RAM/Win10 Lenovo I got from Amazon for £300.