Back When Dance Music Brought People Together 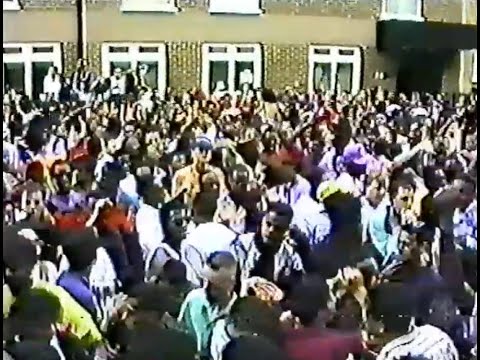 I was talking about this the other day with my friends and wondering why music got so segregated whereas you look at this video and, yes its carnival, but everyone is getting down. Was it when rave went and it went all clubs and then super clubs? I’ll have to go back through some old Mixmag magazines and look at the clubbing photos but it’ll be interesting to see when things split. Anyone have any theories? I may be missing something obvious here admittedly.

Probably when genres began to get pigeonholed, and DJ’s became less eclectic with what they played, so rather than playing across the board, more and more just started playing hard house, or jungle, or techno, etc. So probably around '92?

Agreed defo around 92/93, when new genres & sub-genres started to emerge and mutate – sounds became more disparate e.g. hardcore & jungle got darker & faster, techno got harder, trance emerged. So tempo had a lot to do with it I reckon, as did which drugs you were on

Isn’t it sadly that a lot of door policies were (are) pretty racist?

I guess you were more likely to see this kind of mix of people at carnival or the rave than in the majority of UK nightclubs in 1990.

I’d say it changed from around 90/91 onwards. The music started to splinter off into different sounds and in doing so started to segregate, rather than unite, audiences.

No doubt loads of reasons, but in part, a lot of the core types of UK clubs (house, techno, Balearic network etc) started to draw a lot of their aesthetic references from predominantly white sub cultures (mod, punk, hippie etc) and even the way club culture was written about/photographed portrayed it as more like a progression of white-led counter culture.

'92 I reckon. Coke became way more prevalent (I remember getting laughed at by a bunch of moody Coked up twats at a DiY party just for being on an E vibe). Rave went Hardcore. Jungle and D&B and a darker edged vibe started to come in. Coke and more Coke…

True,even now in Notts lots of djs are told to not play r n b.

Also I like Gallery Sounds but for Notts it is not a very diverse crowd. No intention on organisers part but Notts is very diverse city. Think towards end even DiY became very white.

Am hopeful though that youth aren’t that bothered and just get on with it. Arboretum was full of every color and creed, flirting and play fighting when the sun came out

Is that on jungle etc based on perception or experience?

UK Garage’s debt to late-90s r&b and hip-hop is probably significant. It didn’t just take the rhythmic innovation, but it took the aspirational fantasy messages - bling, brands and champagne. Of course, not all US music was like that and not every UK garage raver was mad for conspicious consumerism etc. But the Timbaland/Missy axis of twitchy beats and divas ready to be sampled were a huge influence on the style and it’s not a great leap to imagine the listeners and producers crossing over between those scenes.

I think a lot of the decadence of those scenes was a reaction to being actively unwelcomed due to perceptions of race and class, too. If you’re constantly told you’re not welcome for reasons you can’t control, it’s human nature to want to be somewhere where you’re not just welcome but celebrated. If I am a Nobody in your club, let me be a Somebody in my own space.

I would say that by the time this video was made, it was already quite segregated. You could look at carnival from any year and see mixed crowds. Many clubs (door staff) used to control admission(not all clubs obviously) cutting out many on terms of race/dress code etc, and as the scene divided into house, techno, jungle , D&B, garage etc, everything became more and more seperate. You would have to go back to the rare groove, warehouse and jazz dance scenes to see more integration. The super club era really was the nail in the coffin for integrated scenes.

The super clubs, expensive festivals, sponsorships, and general big business nature of clubbing has definitely not helped the diversity of crowds. I still love going to the simple hole-in-the-wall spots in a city that showcase local djs, barely charge any cover if at all, and attract a cross-section of people that just want to get their groove on. I’m from Toronto and Thursday nights have generally been amazing for this. Now if this fackin’ pandemic would just end…