Sounds like your local crowd isn’t into more obscure music. Most people have no interest in music and many people have 30 songs they like, this is a forum at the exact opposite of what your passing trade might like.

Are you getting paid? Is this a promoted night of alternative music? Also, ‘this’ is your worst gig?

I hope you can retain enough patrons and entertain them by playing a balance of ‘good’ music, it is about the patrons not you.

How about this Abba next time? 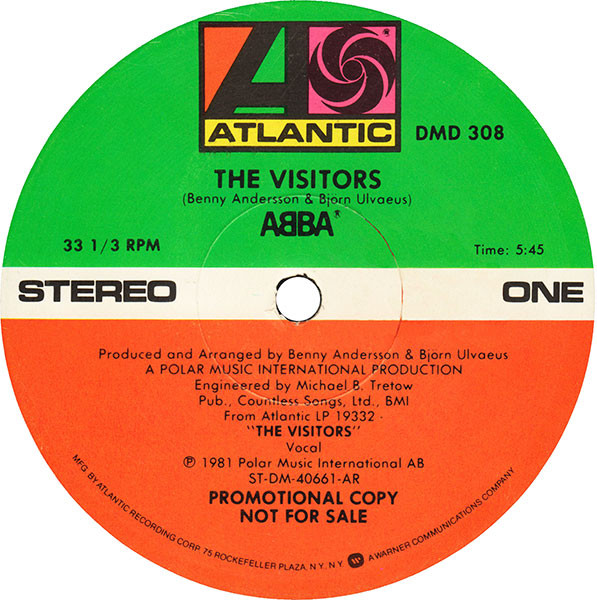 View credits, reviews, tracks and shop for the 1981 Vinyl release of "The Visitors" on Discogs.

Not my worst gig by any means. I mean, there were plenty of people there and I think most were enjoying themselves and I did get paid. These facts alone make me pretty fortunate, I realise that. I just felt that this was the most appropriate thread to have a little rant about the current state of things. Very ‘old man yells at cloud’, I realise.

As for playing obscure music, let’s just say that if I had played ‘The Visitors’ (awesome tune I might add), then it would have easily ranked amongst the ‘obscurer’ cuts that I played on the night. An album cut? How self-indulgent! 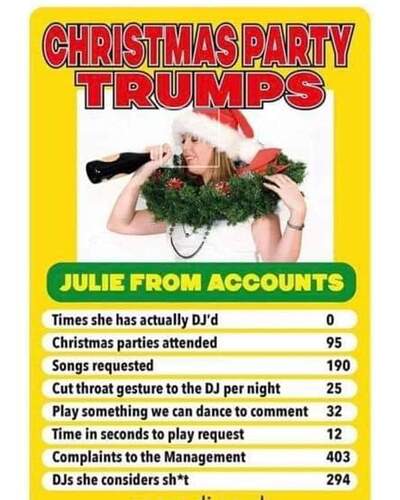 a long time ago i was playing some bar gig, nothing wild - very small dance floor, mostly there to provide vibe, as it were. vinyl only (as i do) and it was mostly fun funk and soul and disco stuff - but not generally the big hits, it wasn’t that sort of bar or scene.

there was a gal who had been sort of pestering me in a mostly friendly sort of way - ‘hey what are you gonna play next’ sort of stuff. she decided she REALLY wanted to hear madonna. i didn’t have any. i asked her what she was drinking - she was drinking gin & tonics. she started to complain again that i didn’t have any madonna - ‘i mean come ON who doesn’t have madonna?’

i bought her a manhattan. she thanked me and when she came back i asked if she liked it, and she said she did. i told her ‘now imagine going to a bar that’s out of gin - no amount of teasing the bartender is gonna make gin appear. but you can still have a good time, right?’

she rolled her eyes at me and left. i kind of hope she woke up with a splitting headache.

Revisiting this thread again, like some kind of DJ ‘Nam Vet.

It’s reminded me of the worst bar gig request I ever had from a really terrifying looking person, and which was “have you got anything by Gary Glitter, like wanna be in my gang, that one”.

And the best bar gig request “do you have any Kid Creole and the Coconuts?” I did! “Oh brilliant, show me the sleeve … that’s me, I was a Coconut” and she clearly was! And she and her mates danced to it and she gave me a big kiss after!

Love this. The least Abba song Abba did.

Good to see the worst gig thread being bumped! I can input (one) of mine in the capacity of the production of a night for another promoter. It’s a real stinker if anybody wants to hear………?

Therapist will need a Therapist after this one….I have worse than this, you are all a bunch of voyeurs!

Bit of background. This is a decade ago, it is true. Names and locations not disclosed for legal reasons, I guess my forum anonymity is a bonus, I’m only on the outer reaches of the dance community and tend to not mix socially.

Around this time I would have been hands on in the warehouse for large scale concert (arena tours etc) type work. After being inspired by the new history of dance music from DJ History and others; I was on a mission to bring that legendary vibe of the NY disco clubs. So a bit of Balearic, a bit of pre hardcore rave and some Barberella aesthetic to my visuals. I deployed a very well stocked shed of rare sound system stuff and unique lighting effects to various local promoters as well as our disco focused nights.

This gig was to set up the 100 ish capacity pub backroom for my usual over the top efforts. From decks to smoke machine, a ton or more of gear. I’d just rebuilt the amp racks and was running a three amp set up with a Klark Teknic crossover just configured for the task over a week or two of evenings. I use proper JBL stuff and had two enormous speakers and a row of bass bins underneath, yep JBL is s*** but show me a Japanese Audiophile bar that isn’t loaded to the ceiling with the stuff. Oh, none of that digital rubbish either here…

Tonight’s gig was a big one as there was a guest ‘quite big name’ DJ X coming. DJ X was from the local area and friends which made this possible with the tiny £3 cover charge which probably did not cover the Pioneer DJ2000 CDJ and DJM mixer to rider spec that was hired in by the promoter. I’d be getting paid a small amount but hey, the economics don’t add up for these things……this night has its magic moments, still going, I urge you to attend, its now free!

I started in the afternoon, loading from the backdoor into this notorious but accommodating pub. It had just had new owners who were apparently ‘drug dealing criminals’, never mind, still up for drinkers, or more? Getting on the usual low, dark and stinky stage, hang on, not usually that stinky, turns out I’ve walked in dog shit, the owners let the enormous dogs run round but negate to do normal dog stuff like walking them. The stage is peppered in dog eggs……never mind…the lady of the pub offers to clean them up. I’m probably washing my shoes at this point in the bogs……it gets worse.

Daddy, son, sons wife/girl and baby in pram appear in the back. Chippy dinner and chat for them all alone in the closed back bar. Charming lot by the look of them. So you know what goes best with chips, yep, you guessed it, lines of cocaine off the bar in front of baby for daddy and son (or daddy and potential son in law, I did not ask the specific family details).

Carry on and everything is set up. I guess the CDJ and mixer will turn up in the evening. I pop off to friends round the corner where I may crash later as I may have few beers on the night.

So the night is going well, I probably have some super 8 cine film reels to spool up and project, maybe a smoke machine to run, a fan to turn on but basically this lot are fairly used to doing this and respect the levels etc. I have friends there and it’s a great party to dance to on the packed floor.

DJ X seems to be cutting out the bass, it sounds a bit tacky, turns out the bass amp is over heating, he scolds me, I put on fan to cool it as it’s a sealed unit and is working hard to put out approx 2kW in the sweaty tiny room. Bass is now fixed!

I’m getting pissed up now, DJ X plays a blended and mixed house set of sorts, not the usual eclectic vibe but the punters an I dance on and love it.

The end, cheers, one more etc…I really can’t remember that detail. Expensive mixer and CDJ’s packed away. I put my SL1200’s onto a dolly board and push them out of the venue, I have a drunk friend to not assist me, It’s about 600 meters to home for the night. The trolley goes everywhere on its crazy castors, we are in hysterics, did I say I was drunk?

Get home with the Technics decks which are too valuable to leave in the dodgy pub till the morning.

Friend finds a bottle of Smirnoff which I befriend and carry like a baby necking straight on the way to ‘the afterparty’. This is next level, I’m in the circle of trust now.

Party is full of the local legends and heads and there are some decks there. I’m on a massive depressive bender of a conversation to the promoters beautiful girlfriend, this may involve women, relationships, loneliness and work related stress. I embarrass myself and can barely speak coherently. DJ X apologies to me for earlier and is the consummate professional, probably now knows this night runs on a shoestring.

I get home soon after that, no idea how, my friend either rescued me or abandoned me.

Hangovers tend to last two days for me, I’m up extra early to start barfing, this is going to knock me for six, generally drinking is not something for me. The gear in the pub needs to get in my van asap.

Get to the pub approx lunchtime……………There has been a ‘break in’ there is some light damage to the fire exit rear loading door. Nothing in the well stocked pub has been stolen…no fags….booze…money.

My two very heavy amp racks aren’t there. Full of Crown and QSC’s finest product. This was a financial loss to me of 3.5k or more, I still don’t want to think about the cost today.

The ‘break in” was instigated by some locals who chatted to me about the sound system earlier, their dad was shitting himself at the front bar when I got the Police in the lobby later to talk about it.

I never did see those amps again.

Kid Creole married one of his backing dancers & lived in Dinnington near Rotherham for a few years. Imagine nipping down the chippy in his usual gear